In this glossary, the often used terms, concepts and tools in this project are described in alphabetical order. The glossary explains how we used the term, concept or tool in the context of this project and, if possible, links to other sites or articles where more information can be found.

Adaptation: The IPCC defines adaptation as: ‘‘Adjustment in natural or human systems in response to actual or expected climatic stimuli or their effects, which moderates harm or exploits beneficial opportunities’’ ( McCarthy et al., 2001)

Adaptive capacity (general): this concept is defined by the IPCC ( McCarthy et al., 2001) and the Millennium Ecosystem Assessment (2006) as follows: "The ability of a system to adjust to climate change (including climate variability and extremes) to moderate potential damages, to take advantage of opportunities, or to cope with the consequences."

Adaptive capacities of institutions: inherent characteristics of institutions that empower social actors to respond to short and long-term impacts either through planned measures or through allowing and encouraging creative responses from society both ex ante and ex post. Adaptive capacity is promoted if institutions (1) encourage the involvement of a variety of perspectives, actors and solutions; (2) enable social actors to continuously learn and improve their institutions; (3) allow and motivate social actors to adjust their behavior; (4) can mobilize leadership qualities; (5) can mobilize resources for implementing adaptation measures; and (6) support principles of fair governance (Gupta et al., 2010).

Community resilience: Community resilience is both a function of the collection of individuals who comprise it and emergent properties that are dependent on social capital, social/cultural values, and practices, including duties to family members, the role of authorities within the community, trust, level of engagement and ethical norms (Etkin, 2016). Nine core elements determine community resilience as it applies to disasters: local knowledge, community networks and relationships, communication, health, governance and leadership, resources, economic investment, preparedness, and mental outlook (Patel et al., 2017).

Critical infrastructure: the European Programme for Critical Infrastructure Protection (EPCIP) defines critical infrastructure as " Physical and information technology facilities, networks, services and assets that, if disrupted or destroyed, would have a serious impact on the health, safety, security or economic well-being of citizens or the effective functioning of governments in EU States. Critical infrastructures extend across many sectors of the economy, including banking and finance, transport and distribution, energy, utilities, health, food supply and communications, as well as key government services (COM, 2004).

Decision Support System of FRAMES: an integrated framework developed to support authorities in their decision-making process concerning FRM in their region

Flood: Article 2 of the EU Floods Directive (Directive 2007/60/EC) defines a flood as follows: "the temporary covering by water of land not normally covered by water. This shall include floods from rivers, mountain torrents, Mediterranean ephemeral water courses, and floods from the sea in coastal areas, and may exclude floods from sewerage systems" (EU, 2007).

Flood governance: a process of - more or less institutionalized – interaction between public and private entities ultimately aiming at the realization of collective goals (Lange et al., 2013).

Flood resilience goes beyond the ability to ‘resist’ when exposed to high water levels, towards the ability to ‘recover’ from a flood and to ‘adapt’ or to ‘transform’ the existing approach considering the future climate change uncertainties. Resilience in flood risk management (FRM) embraces the deployment of measures reducing flood risk through a combination of protection, prevention and preparedness to reduce the flood hazard and associated consequences (Zevenbergen, Gersonius and Radhakrishan, 2020). In FRAMES, the aim is to enhance the resilience of areas, through flood proof design and planning, resilience of communities via increase self-efficacy and capacity of authorities through transnational learning.

Flood risk: Article 2 of the EU Floods Directive (Directive 2007/60/EC) defines flood risk as follows: "the combination of the probability of a flood event and of the potential adverse consequences for human health, the environment, cultural heritage and economic activity associated with a flood event" (EU, 2007).

Flood protection (or layer 1): Layer 1, the first layer of the Multi-layered safety concept, is the layer of prevention and consists of all permanent measures that reduce the probability of a flood. See also 'Multi-Layered safety'.

FRAMES: Flood Resilient Areas by Multi-layEred Safety. The FRAMES project is co-funded by the EU Interreg North Sea Region Program and ran from 01 October 2016 until 31 July 2020.

FRAMES’ integrated monitoring and evaluation framework: in FRAMES, we have assessed, evaluated and learnt from the pilot projects regarding the main outcomes and the capacity development during the implementation of diverse Multi-Layer Safety (MLS) measures. This theoretical framework integrates three components: the Adaptive Capacity Wheel (Gupta et al., 2010) the Triple Loop Learning approach (Pahl-Wostl, 2009) and the Pilot Paradox (van Buuren et al., 2018). More on this can be read in Cosoveanu et al., 2019 and the Transnational Monitoring and Evaluation Report.

Flood Resilience Rose: The Flood Resilience Rose, or FRR (Klenke et al., 2018), is a self-assessment tool to analyze the resilience to flooding in the specific FRAMES pilot sites.  It has been developed by the University of Oldenburg to support the FRAMES pilot coordinators in: 1)systematically assessing and communicating strengths and weaknesses of the current flood risk management approach in their specific target site, an

d thereby; 2) providing a tool to systematically analyze and improve the resilience to flooding in their target site through the implementation of the multi-layer safety approach. See also 'flood', 'resilience' and 'multi-layered safety'.

Flood risk governance arrangements: Interplay (practices and processes) between the actors involved in all policy domains relevant for flood risk management; their dominant discourses; formal and informal rules of the game; and their power and resource base.

Governance: Steering processes and practices through which decisions are taken and implemented, and decision-makers are held accountable. See also 'Flood risk governance arrangements'.

Multi-Layered Safety / Multi-Layered Water Safety (MLS / MLWS) approach: The Multi-Layer Safety (MLS) approach is a risk-based approach to manage the consequences and probability of a flood through three types of measures (see figure 1): (1) prevention through dikes, levees and dams; (2) mitigation via spatial planning; (3) crisis management through preparedness and emergency response (Kaufmann et al. 2016). It has been introduced in the Netherlands in 2009 following the European Flood Risk Directive adopted in 2007 (Hoss et al., 2011; Sophronides et al., 2016). This concept is depicted in the illustration below: 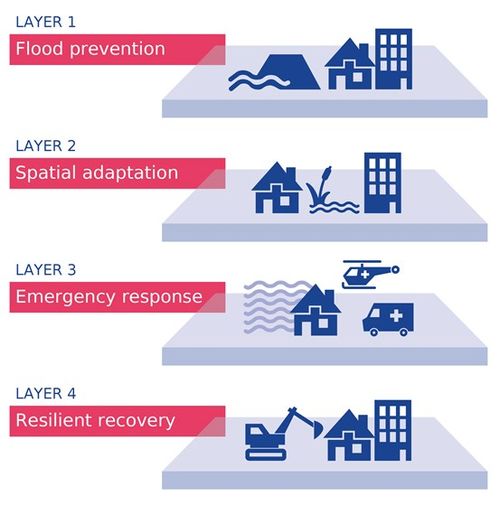 The four layers of Multi-Layered Safety.

Resilience: The UNDRR describes this term as follows: "the ability of a system, community or society exposed to hazards to resist, absorb, accommodate to and recover from the effects of a hazard in a timely and efficient manner, including through the preservation and restoration of its essential basic structures and functions"(UNISDR, 2009).

Recovery: The UNDRR describes this term as follows: "The restoration, and improvement where appropriate, of facilities, livelihoods and living conditions of disaster-affected communities, including efforts to reduce disaster risk factors" (UNISDR, 2009).

Recovery learning is a way to improve flood recovery by learning from past events. It builds resilience during recovery and promotes resilience in regular development. Resilient recovery is a means to sustainable development (DRFG, 2020)

Risk: the IPCC (2014) defines risk as follows: "The potential for adverse consequences where something of value is at stake and where the occurrence and degree of an outcome is uncertain. In the context of the assessment of climate impacts, the term risk is often used to refer to the potential for adverse consequences of a climate-related hazard, or of adaptation or mitigation responses to such a hazard, on lives, livelihoods, health and well-being, ecosystems and species, economic, social and cultural assets, services (including ecosystem services), and infrastructure. Risk results from the interaction of vulnerability (of the affected system), its exposure over time (to the hazard), as well as the (climate-related) hazard and the likelihood of its occurrence."

Vulnerability: The IPCC-definition (by McCarthy et al., 2001) of vulnerability is"... the degree to which a system is susceptible to, and unable to cope with, adverse effects of change, including variability and extremes. Vulnerability is a function of the character, magnitude, and rate of change and variation to which a system is exposed, its sensitivity, and its adaptive capacity." More on this can be found in Adger (2006).

Vulnerability to floods: The degree to which a natural and human system in a specific region is susceptible to, and unable to cope with, adverse effects of flood events. See also 'vulnerability' and 'floods'.